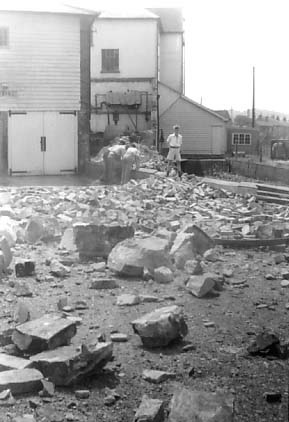 The young Peter Harvey surveys the debris of the chimney at Clover’s Mill – it was knocked down prior to the conversion of the building into the Mill Hotel. It was brought down by about 6 men with pneumatic drills, drilling around the bottom, rather like felling a tree. It was supposed to fall along the Mill stream, but it missed, with a large proportion falling across Clovers forecourt, where Peter can be seen on the photo. The chimney dated from the end of the 19th century when Isaac Clover installed a steam driven roller mill. Taken in the early 1960s.